He is a tactical character who can turn the environment against opponents using mines and homing magic attacks. There are many more tricks up his sleeve awaiting careless enemies.

Emperor's design is taken wholesale from Amano's original depiction of the character with no changes. He appears as an effeminate man with pale skin wearing skin-tight yellow and purple armor with a transparent cloth at the waist and high-heel boots. He has blond spiky hair whose length reaches his waist. On his head are a pair of sideways facing horns and a very small purple snake perched in the middle. He wears a long flowing cape with four distinct tails.

Emperor's style is fittingly called Trap Master. Unlike the other characters, Emperor does not confront his enemies directly, but rather, booby traps the entire arena with powerful spell-based attacks that freeze in place, ready to ensnare the unwary. His effectiveness is wholly dependent on the size of the battlefield. Smaller arenas severely limit the opponent's movements while larger arenas can give the Emperor a more dynamic approach to trap emplacement. Unfortunately, the Emperor's spells can also be turned against him if deflected. Tricks that can be used to prevent this are using bombard to re-reflect any flares that have been turned against you, as well as throwing flares away from your opponent by using the attack while locked off. Strategy is the key while playing the Emperor, bide your time and fool your enemies into falling into your traps!

Power of Hellfire - The Emperor assumes his Emperor of Hell form witnessed at the end of Final Fantasy II. His build and armor become more bulky and his face gains demonic, inhuman features.

Blood Magic - Similar to Firion's Blood Weapons, the Emperor can sap HP from his opponent and add it to his own if he connects with an HP attack. Recovery is proportionate to the HP damage dealt, excluding Wall Rush HP damage. (Ex: When landing 1000+500 (Wall Rush) HP damage you'll only regenerate 1000 HP instead of 1500.)

Absolute Dominion - Input Button Commands as they appear on screen. The Emperor conjures up a cyclone as he gathers energy. The cyclone dissipates and a Spiritual version of his original form appears, using the Entice spell to shock the enemy repeatedly. The original form dissapears, replaced by a Gigantic version of his Demonic Self, which then, after gathering energy for a final blow, causes a small explosion and the HP Damage to occur. If you input the wrong commands, or simply fail to press the buttons, he will instead simply cast Cyclone. 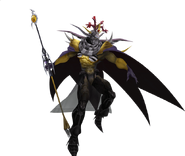 Emperor's EX Mode
Add a photo to this gallery

2. Extra- Purchase for 300 PP at the PP Shop, Takes on a white scheme like the poster art of Final Fantasy II.

- Place one Lightning Crest on the air so that the center circle in the middle does not touch any ground, you will then be able to place another one regularly along the ground after. With this you can cover any holes while being able to freely use the second Lightning Crest for anything else you need.

- An effective counter is when you trap an enemy with Thunder Crest, move to their position and use a Ground Mine. You can delay launching the mines until near the end of the duration of Thunder Crest. This should result in very respectable damage if done properly. Also works better if done to an opponent you just caused to stagger. Effective with Crit enhancing abilities like Riposte, Counter Attack and Sneak Attack.

- Litter Aerial Mines all over a small tight battlefield like pandemonium, then execute Light Crest attack. If it connects, chances are your opponent will start bouncing off mines and receiving excellent damage.

- The best way to protect yourself during Starfall is to prepare beforehand. Position yourself somewhere nice and covered but not too cramped. Let out both Flares, use both of the Crests and keep the area littered with Mines.

- Plant a thundercrest and litter mines all around it (aerial and land), then fire a dynamite shot in the center to drag the enemy into it. Fire your flares to make their life miserable, and cast starfall in the center of the thundercrest to be the best camper possible.

- A good way to deal HP damage with Emperor is to get your opponent caught in either Dynamite or Thunder Crest. While they are taking damage from this attack, you can walk up to them and hit them with Flare. They will be unable to avoid the hit.

- A trick to protect the Emperor when he is fighting Chaos, the game's final boss, is to cast an aerial Flare, which will stay still in the NA release. The Flare deters Chaos, so players can "hide" inside this Flare and completely cast Starfall.

- A good way to del HP damage and bravery damage is to successfully hit with starfall, dash towards the opponent as fast as possible (multi-airslide+ works best) and wait for the attack to hit. If it hits while they are above solid ground, they will then take damage from hitting the ground and be staggered long enough to put a thundercrest right underneath them. This will deal critical damage (as bravery will be zero immediately after starfall), usually causing break and allowing for a flare. If you can't cause a break, fire a landmine at the end to devastate their bravery.

- Opponents (especially human player) can evade Starfall now. If this happens, go dash towards them and throw some traps (dynamite, mine air - maybe optionally a flare). Do this as soon as Emperor has casted the Starfall and starfall starts falling. If you succeed, your opponent can't evade the final giant meteor and still receive HP attack + guard crush.