While he is mainly a magic user, his attacks often have unpredictable motions and behavior that confuses the opponent. His spells can home in on the enemy, and his play style relies on taunting the opponent into making foolish mistakes. In the Japanese version he is called Cefca, but in the USA he's known as Kefka. In the beginning of the original game Kefka acts as the court mage of Gestahlian empire, and simply carries out his monarch's orders. However, behind Emperor Gestahl's back, Kefka drains magic meant for Imperial usage. Kefka then overthrows Gestahl and takes control of the source of all magic, the Warring Triad, absorbing its power into himself and effectively becoming the God of Magic itself.

Kefka's appearance is taken directly from Amano's concept art. Kefka breaks the mold for many villains who have come before and after him. He appears as a blond middle-aged man with white face paint on and purple lining around his mouth drawn to resemble a smile, much like a jester. He wears a deliberately mismatched jester-like outfit featuring vibrant palettes and hues with distinct patterns such as polka dots and stripes. He wears a red cape with with red and yellow lining and distinct tassels at the end. He also wears several scarfs with the same tassels around his neck and around his waist.

Kefka is fittingly referred to as a Mad Mage, utilizing unstable and erratic versions of Black Magic spells in order to confuse and overwhelm his opponents. Kefka can cast his spells multiple times to keep his opponents guessing due to their random movement so that he may inflict consecutive damage from all angles. He has no melee attacks, so he must play it safe at a distance.

In Dissidia NT, he retains his ranged game as Marksman. His attacks are made more devastating as he can now charge up any of his attacks to increase their range and power and is able to move while charging. To play up his deceptive nature, he is also given a new Bravery attack that places a false Summon Core on the field, blasting enemy unwary enough to fly into it.

Power of Destruction - Kefka assumes his God of Magic form, seen at the end of Final Fantasy VI. His clothes disappear, leaving only a loincloth. His skin darkens to a pale purple tone and he gains six wings: four angelic ones and two devil wings.. His expression changes into that of a much more sinister and demented tone.

Exhilarating Magic - Kefka's spells become much more powerful and more erratic in nature. He can Doublecast his spells with randomized effects, annihilating his opponents with a horde of magical attacks that can wipe out his opponent's Brave in casual swoops. (Always active while in EX Mode)

Glide - Kefka can glide through the air with his wings. Activate by holding X button in midair

Kefka poses while gathering unfathomable magical energy, then unleashes it in the form of his Light of Judgement; a concentrated beam of magical energy fired from the heavens. If the buttons are input incorrectly, he uses his Forsaken spell, instead.

Kefka can wield instruments, rods and staffs, and can wear clothes and robes, bangles , hairpins, ribbons and hats. 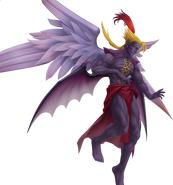 Kefka's EX Mode.
Add a photo to this gallery

Retrieved from "https://dissidia.fandom.com/wiki/Kefka?oldid=12928"
Community content is available under CC-BY-SA unless otherwise noted.